I am trying to copy/migrate jenkins application from one old linux server(RHEL 6) to another linux server (rhel 8) server.I have copied the old jenkins home directory and ran below java command

and i tried to login with new hostname:8080 .i am getting below error. Could you please help me on how to resolve this.

Are you using the same Jenkins version on old and new server?
If you use a newer Jenkins you probably have a plugin installed that is written in jruby.
jruby is no longer supported in Jenkins since Jenkins version 2.332.1
You will need to uninstall the plugin.

The specific message indicates that you have one or more plugins installed that are written in Ruby rather than being written in Java. The Jenkins project dropped support for plugins written in non-Java languages in January 2022. You’ll need to remove those plugins. The list of affected plugins and more details are in the blog post: 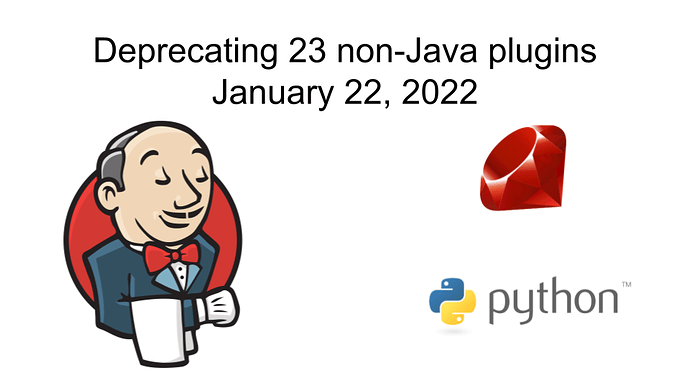 This blogpost announces deprecation and the upcoming depublishing of Jenkins plugins based on the Ruby Runtime and the Python Runtime, including Gitlab Hook, Cucumber, pyenv and Rvm plugins.

Several of the command line options that you listed have been removed from the most recent Jenkins LTS release. You can read about that removal in the Jenkins 2.375.1 upgrade guide.

@mawinter69 @MarkEWaite
Thanks for your quick suggestions.

I will explain what i have done for jenkins application movement.

I have copied jenkins home directory on new server (RHEL 8 ) and installed latest java version. I have ran below command.

it did not came up and later i have removed (ruby and phyton) jars and it came up and also jenkins version also got upgraded.

but jenkins jobs are failing. do i need to anything else.

do i need to anything else.