So I was trying to deploy a simple CD pipeline using docker by ssh’ing into my AWS Linux EC2 instance in WSL2 terminal. The job is failing everytime returning the following error: 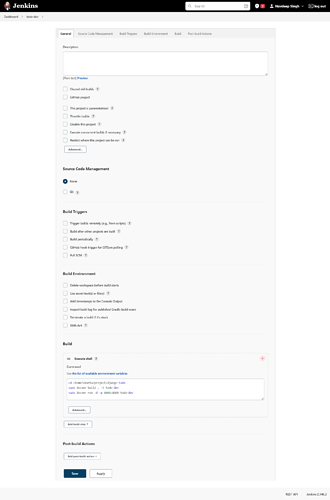 Where are you doing the ssh part? It’s saying /home/ubuntu/project/django-todo isn’t available on the agent (built-in node so controller).

I think you are missing the ssh part

Where are you doing the ssh part?

On my WSL2 terminal. SSHing into my Amazon Linux machine from there. Actually what I did was following exactly these steps to deploy my first Jenkins job.

Okay but you are not sshing at all in your job. Are you wanting to?

In my previous reply I told you what was wrong and at least one idea how to fix it. Do those not work? Do you need more help?

@halkeye could you please guide on further on these steps as I am facing the same problem.

I have launched AWS EC2, i am connecting to ubuntu server using putty and then I am using Jenkins to do Continues deployment part.

I have created a freestyle project, created a job with below build config steps:

In my case, I solved this issue by doing following things.

Hope, this will help you